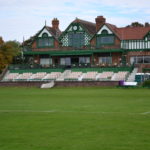 Preseason Training begins at Liverpool Cricket club for Senior Men’s and Women’s teams. Training will start from 6.30pm to 8.30pm.

Whether you are new or old to the club, have played for 5 years or 5 months, we’d love to see you there!

We look back at a couple of excellent weeks for the men in red. First we’ll look at a tough away fixture vs Rochdale A in a top of the table clash and then cast our eyes on the men’s first home game of the season.

Our boys made the long journey up to Rochdale in what was expected to be a hotly contested match with promotion connotations. In recent years, the northern Mancunian side has gotten the better of our Merseyside boys, so this made the prospect of an away win all the more difficult for the men in red.

LivLax started started the game well with some sustained possession looking at finding a way through an experienced defense. A few exchanges early on for both teams but, neither goalie was really tested until the 8 minute mark when Liverpool’s Dan Brown opened the scoring. This would be the first time this season that Rochdale would trail in any of their games. Mikey Panton would score another just a few minutes later as LivLax doubled the lead. This woke up the home side and they would reel off three goals before the break.

Trailing by a break a tactical change to slow the game down and play a more controlled style was brought in. The first five minutes of the second started with four turnovers for the home side and it would be the fifth where Rochdale goalie Pete Dobson would have his pocket picked while clearing, Sean Gibson who picked off the pass easily scored on an empty net. LivLax would immediately go on to a man advantage as the goalie threw his stick on the play and the ensuing man advantage would see LivLax’s Gibson grab his second of the game. More pressure came from LivLax and a forced turnover on the midline by Matthew Conway saw Gibson score his Hatrrick goal on an empty net shot from half. Rochdale would pull one back before George Widdowson would score for LivLax. More sustained pressure from LivLax saw Tom Dexter take a hard check from behind and a Rochdale defender flip the ball blindly to the net where Gibson scooped up the ball and finish easily for his fourth of the quarter. LivLax would finish the half with all the momentum and a 7-5 lead.

Liverpool’s defense took over lead by Frank Lewis who was having a solid performance behind a well organised defensive unit. Both teams would exchange goals in the third but, really the story was the dominating performance by the LivLax defensive unit and the controlled possession game played by the attacking unit.

The fourth quarter was all about closing this game out and more defensive pressure and sustained possession frustrated the Rochdale side. LivLax would get another couple of goals through Mikey Panton and Ming Trinh in the closing portion of the game. Liverpool would march out to a 10-7 away win and their first win over Rochdale in some time. Man of the Match honours went to Sean Gibson this week but, really it was a full team effort and any number of players put their hand up for MoM considerations.

Stoke was a different game altogether, LivLax was looking to close out first overall in the promotion battle while Stoke was looking for their first win. This was LivLax’s first home game of the season and the men in red were looking to impress their home fans.

Impress is exactly what they did. Though it did take about ten minutes for LivLax to shake off some complacency and get things rolling.  Ben Brookes got LivLax up and running finishing in close. Sean Gibson would grab three before the end of the first quarter.

The second and third quarters saw the offense put on a clinic scoring a further 14 goals  before heading into the fourth quarter. Now on a score of 18-0 and with 6 different goal scorers the LivLax side looked finish strong and close the game out well. Ben Brooks would finish out an four goal, eight point performance as well as Gibson who finished with a season high 15 points and 10 goals. Ming Trinh would cap off an eight point game with a couple goals of his own as well.

If last week was all about team defense then this week was all about team offense. The score finished 23-0 and it was a well balanced game for Liverpool’s attack with 8 eight players scoring for Liverpool and four players having 5 points or more in the game. With all this offense, it would be Liverpool’s George Widdowson who earned Man of the Match honours for all his work in the midfield and at the face off X. Frank Lewis earned his first shutout of the season though Mikey Panton (back at long pole) made the save off the game when Frank went out to play a ground ball.

Congratulations to Liverpool Men’s team who have now clinched top spot in Division 2B and will now head to Divsion 2H with Rochdale and either Cheadle Hulme or Wilmslow (who play each other next weekend). Liverpool will now face Ashton to close out the remaining game in CHampionship 2B next weekend at Liverpool Cricket Club on Saturday. 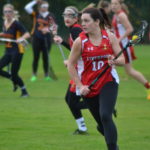 Time To Learn When Things Don’t Go To Plan!
After two disappointing results against Brooklands last season we hoped to turn things around this year. We started the game with a clear plan which fell to pieces very quickly when a yellow card meant that we were one player down. Brooklands capitalised on this well and moved the ball efficiently around the fan until they were in a great position to take the shot. It wasn’t long until we were 4 nil down. 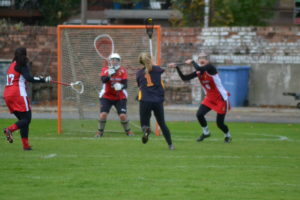 A quick time out was taken to slightly change the plan and try to stop the same player being free all the time. We went back on the pitch ready to get ourselves back into the game and immediately gained possession from the draw. This gave us a brilliant opportunity and India Chaddwick once again scored an excellent goal to put us on the score sheet.
For the majority of the first half our defence was having to pick up an extra Brooklands’ players who had made the break from midfield. This obviously left them in difficult positions and Brooklands were very good at passing the ball off to the free player who was able to slot in another goal. Luckily for us a few moments of magic from Katie Bishop pulled us a little bit closer as she scored two goals in quick succession.
Half time couldn’t come soon enough and even though a number of player were working hard to get free for the 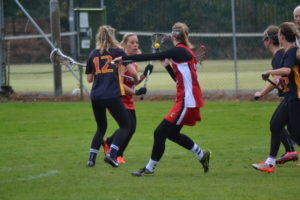 clear it was important just to hold the ball so we didn’t give Brooklands the opportunity to score one more! The half time score was 3-10 and we were glad that Ally Stutley was still standing. A number of players shared their ideas but the main points gathered were that we needed to go back to basics. Marking our players rather than letting them drift off and stop passing the ball so close to the goal circle that the goalie is able to intercept the ball.
In the second half Brooklands continued to dominate the draw, which immediately put us on the back foot. Ally 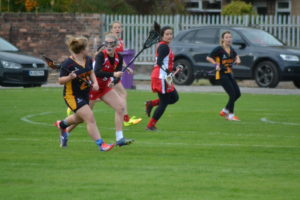 Stutley and Ginnie Jones are tactical geniuses, they decided rather than continually being picked off we needed to change something up and try to slow down the extra players from midfield until we could get back into position. As a defensive unit we dropped back to the 15. We couldn’t have hoped for a better outcome with two quick turnovers. One lead to Alex McCaldon gaining a free position and finishing it off in style to score her first goal of the season. Unfortunately we were playing a team who work well together and use their brains’ when playing. They continued to move the ball quickly which left us with one too many slides to make and another few goals down. 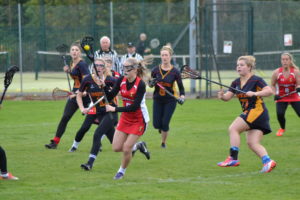 The highlight for us in the second half was Jenna Boon’s hat-trick. Two were outstanding goals from free positons which shows that practise does pay off. If we keep working on our ball movement, cuts and decision making in training then we are going to keep improving and a winning a few more games. Challenge for the week, find some time to wall ball. Ashley Bruen and Linda Musker will be promoting the sport whilst practising together at Liverpool University during their lunch break!
One of the many storms we had to ride out during this game was when Ally Stutley received a yellow card. The defence continued to work hard and tried to hold out but once again Brooklands found the space. Our final celebrations were when to Gaby Sims scored another goal to add to her growing tally. 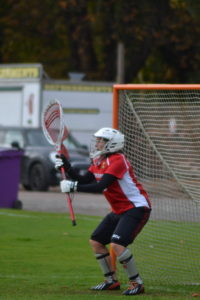 The final score finished 8-17 with a much better second half performance and a 5-7 scoreline. If we started playing from the first whistle it might have been a different game! What we have to take away from this game is that we had some magical moments from a number of players but if we keep playing as individuals then we are unlikely to achieve what we are all aiming for. Brooklands have really improved over the years and have become a force to be reckoned with as they have learnt to make the right choices and play for the team rather than their own score tally.
Special mentions go to Ally Stutley and Ginnie Jones for the excellent tactical decisions that you made in defence.
Player of the match was awarded to Katharine Hughes.

This past weekend LivLax were due to head down the M62 to take on Wilmslow LC. Unfortunately, Wimlslow where unable to field a team due to other commitments. As such, the points have been awarded to LivLax taking them into second place on 6 points. The LivLax lads now just need one more win from their remaining 3 games to clinch a berth in Championship 2H giving them the opportunity to gain promotion.

Congratulations to Francesco Lewis who turned 103 this weekend! Happy Birthday Francis you might be old but, you still go it!