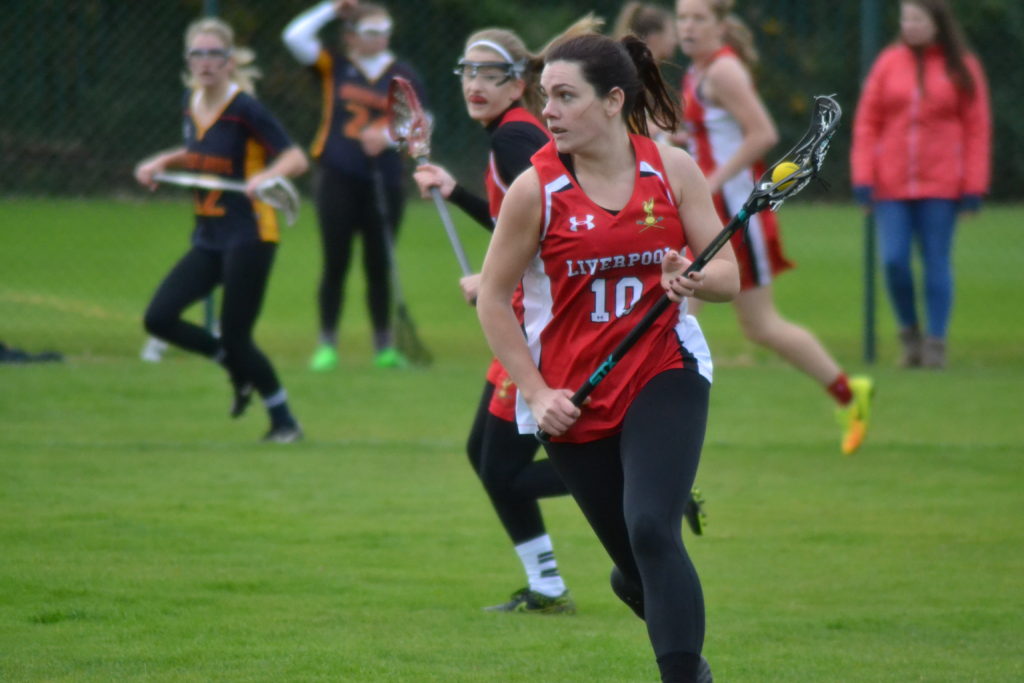 The first game of the season: adrenaline racing, nerves flying, excitement reaching its height. As Stockport could only field a team of 10, Liverpool agreed to match their numbers to kick start the season. With a number of new players joining us with varying levels of previous experience, this was an energetic, if exhausting, introduction to Liverpool Ladies.

Right from the first whistle, both teams got stuck in with enthusiasm. Dakota Chamberlain was a powerful force on the draw. Despite the opening goal going to Stockport, Liverpool rallied straight away with a fantastic goal scored by Ashley Bruen on a fast break. However, a thirst to score early on this season at times hindered a structured and controlled settle from the Liverpool attack, meaning that Stockport were able to turn the ball over. Despite valiant efforts from the defence, and goalkeeper Katherine Hughes, a number of Stockport goals went in without a Liverpool reply thanks to their sharp shooting and fast feet.

Rallied at half time by captain Alexandra Farrington, the Liverpool defence was reinvigorated for the second half and applied high pressure to the Stockport attackers, effectively slowing them in their tracks and allowing the Liverpool team to begin to take more control back in front of the goal. Katherine Hughes continued to put her body on the line, coming out of the goal fearlessly on a number of occasions to thwart the Stockport agenda, and the experience of Bethan Keenan was invaluable in bringing together the defensive unit.

Liverpool newbies Emily Tootle, Meg Hopkinson and Lucy joined forces with Dakota and Ash in the midfield to drive the ball back towards the Stockport goal, thankfully being rewarded later in the game with a goal from Dakota Chamberlain. As the final whistle crept ever closer, the game felt more evenly matched than the score line suggested as Liverpool managed to lift the tempo to apply pressure right up to the final whistle.

A big learning curve, but a valuable experience to kick off the season. Bring on the next game! Player of the match was Katherine Hughes for the attack and force she applied in goal which doubtlessly prevented many more goals being scored and for her ability to calm and control the game with her patience with her clears.